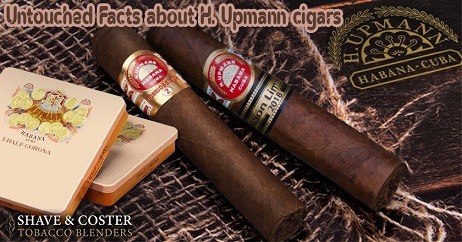 It was founded in 1844 by the legendary Herman Upmann and family, who arrived in the new world as a banker but soon developed a keen interest in cigars. It is thought to have started as a hobby but the brand’s success meant the brand has exceeded and outlasted most other cigar brands from its time.

Herman Upmann came up with the idea of presenting his Cuban cigars to customers in cedar lined boxes to preserve the humidity and enhance the cigar’s flavour. This means he effectively invented the humidification system that we know today.

The brand actually went under in the late 1800s due to it being privately owned and financially tied to the H. Upmann bank.

Fortunately, after the brand’s collapse, a British firm, J. Frankau & Co purchased the brand name and continued production until 1935 when it changed hands again to Menendez Garcia y Cia Co. With the new communist government posing a threat to private firms in the country, production was moved to the Canary Islands and later to the Dominican Republic. Castro then nationalised the H. Upmann brand in Cuba.

Production continues there until this day, for the American market. The non-Cuban alternatives are often overlooked throughout the rest of the world, however.

The Petit Upmann was the President’s favourite cigar from the collection and after signing the Cuban Embargo, he returned home with over 1200 cigars.

After taking the time to read up on H. Upmann, it’s time to try!  Here’s our pick of Upmann cigars.

A small, attractive cigar that is deliciously creamy with hints of coffee.

Made with only the finest tobacco leaves, this is a light to medium-bodied cigar that is full of elegance and charm.
Alternatively, you can browse the full H. Upmann range.