Davidoff Cigars from seed to ash 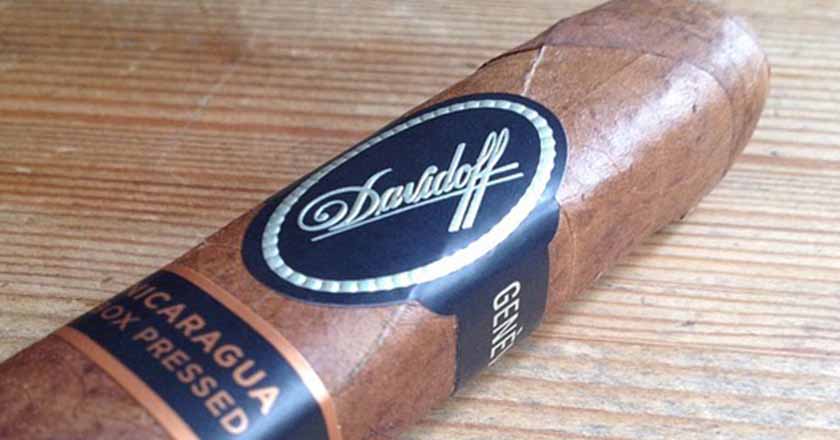 The ten most important factors for producing quality cigars are:

Both soil and climate can not be influenced by man, but man alone can select the growing area for tobacco.

The soil and its components will influence the aroma and flavour of the tobacco. The same seeds planted in different soils will have different charecteristics.

a) The Olor Dominicano (tall plant with smaller leaves)

c) The San Vincente: a hybrid of Oldor Dominicano and Pilato Cubano

The life cycle of the plant is as follows:

Seeds are planted on the 24th September. On the 2nd November (All Saints), the farmer will commence the transplanting of the young tobacco plants. It takes approximately 5 weeks for the seed to develop into a young tobacco plant ready to be transplanted. On the 6th January (Epiphany), the harvest will commence (in some areas, the harvest will carry on untill end of March).

The cycle of the tobacco lasts 10 weeks from the time the farmer plants the seed untill the harvest is finished.

November and December : Development of the plant.
January : There is a change in the climate (less sun), the plant is achieving maturity and it is time for harvesting.
February : Time for curing.

Some farmers plant 2 harvests a year, Davidoff does only one harvest, in order to give the soil sufficient time to rest and regenerate. The leaves are always picked, beginning at the base of the plant and working upwards. Only about five leaves are picked from each plant at a time, and on a weekly basis.

4-THE POSITION OF THE LEAF

The bottom leaves are milder in flavour and aroma. they have lessnicotine because they are not so exposed to the sun. They are also larger and have a stronger structure. This gives them a very high combustion index. They also have a low starch quantity.

At the opposite end, the top leaves will have stronger flavours and also contain more nicotine, around three times more than the bottom leaves.

The plant can be divided as follows:

– The very top leaves are called Picadura. They will be discarded as the nicotine content is too high.

– The upper leaves are called Corona and the tobacco produced from those leaves is called Ligero. These leaves will be the strongest is terms of nicotine and flavours.

b) The Middle Part (Centro). – The tobacco issued from these leaves is called Seco; it will have medium flavours.

– The upper bottom is called Uno y media and will produce the volado leaves with a high combustion property but light aroma.

– The bottom part is called Libre de pied and is not used by Davidoff as it is very earthy in taste.

Here we are talking about the practices of the farmer. The tobacco plant will be influenced by:

a) Fertilisation process and quantity of water

b) Density of planting per hectare

d) Time of harvest : it is only in the last three days of the leaf maturity that essential oils are produced.

The topping is the process of cutting the flower off. In order to allow the leafs to develop fully and to get the best of the soil nutriments, the flower needs to be cut off. The farmer will select the best plants (compared to the model species) in his field and leave the flower to develop in order to producue seeds. The rest of the flowers will be cut off. The flowers of tobacco plants hermaphrodites (i.e. contains both the female and male sex). In order to keep the integrity of each selected plant, the farmer will cover the selected flowers with a sort of muslin in order to prevent pollination by insects.

For wrapper leaves, the flowers are not cut, because the farmers are looking for thin and very light flavour leaves. Also the plantations of wrapper leaves are covered with muslin sheets/tents called Tapados. This prevents the leaf from being damaged by extremes of weather and from the sun. leaves exposed to a lot of sun will become very oily and will develop strong flavours. Neither of those qualities are desirable for wrapper leaves.

The curing process will take 45 days and is done in the curing house called a”Rancho”, a wooded barn with palm trees leaves on the roof. The sides can be opened or closed using plam leaves. The curing is a totally natural process taking place in January and February.

The leaves are tied in bunches of 5 leaves with the Volado, Seco and Ligero being kept separate. The farmer takes a long string and then ties each bunch onto this string. The string is then hung horizontally in the curing house.

During the next 35/40 days, the second chemical reaction will take place. The sugar will transform into phenol alcohol. This will correspond to a change in color from yellow to brown. This process takes longer in order to ensure that the sugar is completely transformed into phenol alcohol.

The curing process will also see an important development of the flavors and aroma of the leaves.

The dried leaves are then sent to the fermentation house. On arrival, each area of production and each variety of plantation leaves are kept separately. The leaves are sorted by type i.e. Ligero, Seco and Volado. The fermentation period will be different for each type of tobaco-leaves.

The three conditions necessary for the tobacco fermentation are time, humidity and temperature

During the fermentation process, the nicotine becomes more ammoniated. It is to be noted that all along its life the tobacco will produce some ammonia. The more humidity, the grater the ammonia.

The variety of tobaco-leaves will also influence the fermentation time. for example, the Pilato Cubano will need more time than the Olor Dominicano or the San Vincente varieties.

The Cubans cigars manufacturers do not ferment the tobacco as much as Davidoff. Therefore it needs a longer ageing process. They use low piles and therefore achieve lower temperature. As a consequence, the tobacco is less fermented and will require a longer ageing.

The fermentation process of the wrapper is a very long process, taking up to 7 months and involving at least 10 pile movements.

Each cigar company has a different policy for ageing. Davidoff has an inventory of around 3 to 4 years of cigar production.

The second option would be to use a boiler/steamer. The cooking process will “kill” the tobacco and its flavours. The wrapper will then have no more influence on the aroma of the cigar because of the high temperatures used in that process.

9-THE EXPERTISE OF THE MANUFACTURER

This includes the following:

The perfect condition of the tobacco leaves

The experience of the cigar roller

Once the leaves have sufficiently aged, the are then re-humidified so that they are more flexible. The leaves are slightly sprayed with water and then left for 24 hours covered with sacks. The next day, workers remove the stems from the leaves.

For the Ligero leaves, the stem is removed manually just by pulling it. The Liggero leaves are always used as the first leaf at the center of the cigar. They are slow burning and also will ensure a good airflow when you are drawing on your cigar and give a good construction base as well. For the binder leaves, Volado, the stem is removed mechanically.

After being re humidified, the wrapper leaves are sorted by size and colour. They are then rolled and stored in a cool area.

Once the stems have been removed from the leaves, the leaves for the filler and the binder are sent to the blending room. In that room, the experienced blenders are putting together the correct blend and quantity of tobacco leaves to make 25 cigars of one type.

In blending, there is always a minimum of 25% of one type of tobacco-leaf.

On a daily basis, the Cigar Roller is given the necessary tobacco to roll around 200 cigars. The Cigar Rollers work in teams of 2 people. Both of them are professional rollers. They roll the filler and the binder (the top of the leaf is always at the bottom of the cigar). They will then put the cigars in a mould. A mould holds ten cigars. The cigars are then pressed for 20 minutes, turned 45 degrees, pressed for a further 20 minutes, removed from the mould and the mould and outside wrapper is rolled around the cigar.

Once the cigars are rolled, they go through a quality control process. The control consists of ensuring that the cigar is well constructed and that both the diameter and the length are correct. For a cigar of 43 ring gauge, an acceptable cigar will have a ring gauge between 42.7 and 43.1. A cigar roller will roll up to 200 cigars a day. A 95% accuracy rate is required.

After being made, the cigars are stored in a humidity-controlled room for 21 days. This will allow all the aromas and flavours from the different tobaccos involved in the cigar to blend together, and ultimately to give a better and more enjoyable smoke!!

Both storage in the warehouse of the manufacturer, and in the shop, are very important. A cigar needs to be kept at a relative humidity level of 70% until it is smoked.

If the atmosphere is too humid, then a fungus commonly called “Bloom” will develop. As long as it is on the outside wrapper, it can be easily removed with the finger, but if it gets inside the cigar, then the cigar will smell moldy and will not give a good smoke.